Low vs Moderate vs High 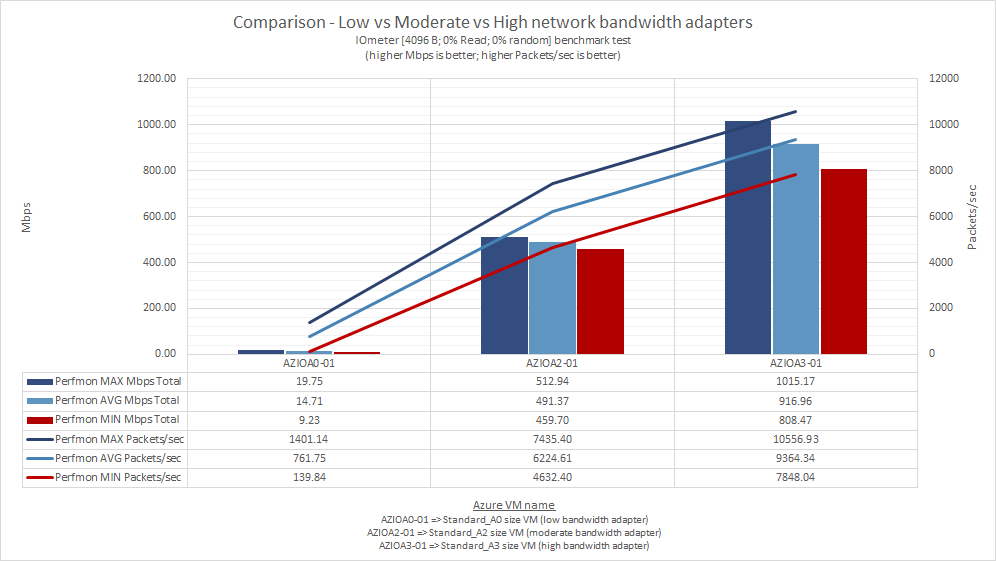 In the above chart, we can see a comparison between Azure Low, Moderate and High network bandwidth adapters. From this chart we can see there is a clear difference in performance between them. Microsoft is not providing exact numbers what low, moderate or high network bandwidth means, but so far from the [4096 B; 0% Read; 0% random] IOmeter benchmark results, we can say:

We also have to pay attention to the average registered speed! In a stable network the average performance must not be that far away from the maximum recorded value. The maximum recorded speed can be reached just couple of times and can be exceptional (especially when software bandwidth management is involved), while in the majority of the time the registered speed is much lower. That’s why the average recorded speed is the one that most likely we will reach – so this is the actual value we should take into consideration in our network requirements.

The above chart indicates the average write response time IOmeter recorded for the [4096 B; 0% Read; 0% random] I/Os. Especially when we discuss computer networks there is some variety of communication channels and each of it has its specifications. I did a lot of searches on this topic to find recommendations of what the response time should be (what is good and what is the point where the latency becomes problematic on Ethernet networks).Because the answer depends on so many variables I decided to dig through what Microsoft, Citrix, IBM recommends and ended up with 0.5 milliseconds (500 uS microseconds) as being the maximum accepted latency for the Ethernet network.
These numbers are provided by IOmeter and are registered when the network is saturated.
As expected, there is a considerable difference between the Low and the Moderate Azure network bandwidth. The difference between Moderate and High network bandwidth is not big. 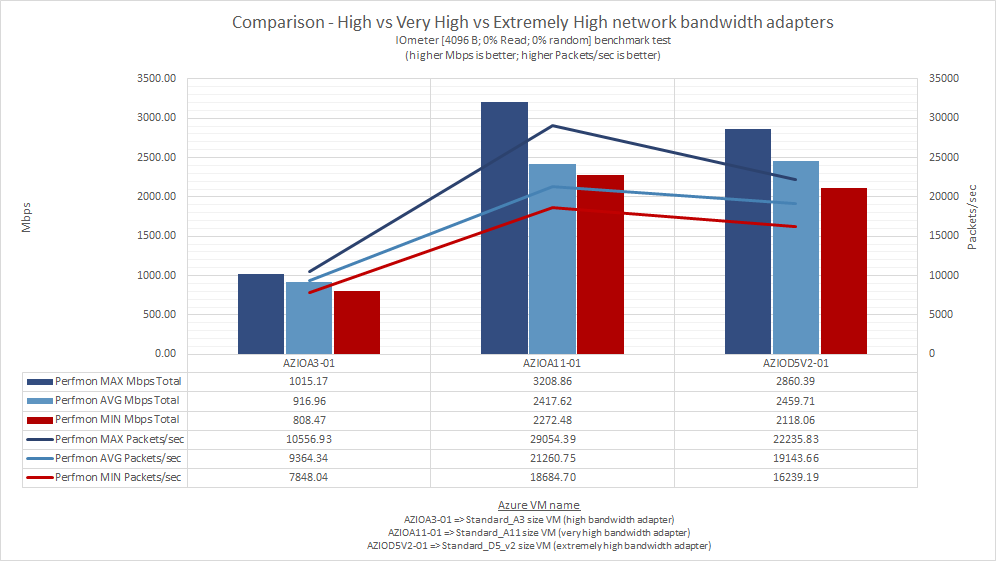 We can see there is a clear difference in performance between Azure High and Azure Very High or Extremely High network bandwidths. Microsoft is not providing what exactly these network bandwidths means, but so far from the [4096 B; 0% Read; 0% random] IOmeter benchmark results, we can say:

A couple of chart explanations above I mentioned the importance of the average recorded speed. Looking at the average speeds registered by Azure Very High and Azure Extremely High network bandwidths, I tend to say there is not that much difference between them in terms of performance (at least the [4096 B; 0% Read; 0% random] IOmeter benchmark doesn’t indicate that).

In terms of write response time, all these VMs registered average times under 0.5 mS. That means the Azure High, Very High or Extremely High network bandwidths can handle very well the network traffic even when the network is saturated with this type of traffic ([4096 B; 0% Read; 0% random]).
As noticed also in the previous chart, there is a clear difference in performance between Azure High and Azure Very High or Extremely High, but the last two are not much different one from the other.